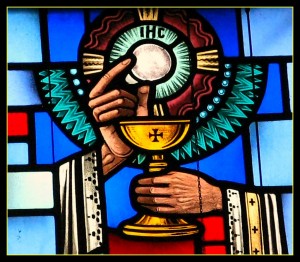 Several years ago I went on a trip to The Netherlands with a small group of friends. Towards the end of our stay we decided to check out a very old church from the inside by attending a service. I might as well mention here that we were a group of energetic, college-aged Americans.

We were late. We were under dressed. We were the only young people in the room. And every head turned as my friends noisily took their seats and tried to figure out what the heck we were all supposed to be doing. Everything was in Dutch. My friends were whispering louder than most people talk and that got us even more dirty looks from the old people. After fumbling to keep up with a few hymns and reading aloud in unison, it looked like we were finally going to get to sit down for awhile.  Except that I couldn’t sit, something was wrong with my bench and I had to perpetually kneel on the prayer stool at a weird angle.  My friend Rick, who apparently does not have a healthy reverence for the house of God, thought this would be the ideal time to find out exactly how ticklish I was. Let me tell you now that my tickle-tolerance is a below zero. My side and my knee were attacked and I had to bite my lip and draw blood to keep from making an even bigger scene. My whispered pleas and threats were disregarded, and by this time the priest was making eye contact with me. I didn’t know priests were even capable of giving “the look” but this guy certainly was. I don’t know what was worse: the fact that I was making a scene against my will or the fact that none of my friends seemed to think anything was amiss. Now it was time for communion.

I shuffled into the line and tried to see ahead and figure out what I was supposed to do. But Dutch people are very tall. And I couldn’t even see past the person in front of me. Too soon I was standing in front of the priest. I only had movies to guide me. I had watched actors hold out their hands to receive the bread, but I’d also watched them open their mouths and receive wafer deposits. I hesitated, and like an idiot opened my hands up AND my mouth. The priest looked at me funny and placed the wafer in my hand. I didn’t even bother with the wine.

By this time the priest and I were on track to start dating with the amount of times I attracted his gaze, getting blamed for my friends’ insensitive behavior. The service finally closed but to my great horror the priest stationed himself at the only exit and was shaking hands. The door was not very wide, but I was so mortified by this point and did NOT want to look this guy in the eyes again, so I put my head down and walked past him as fast I could. So much for sightseeing.

beth the other admin